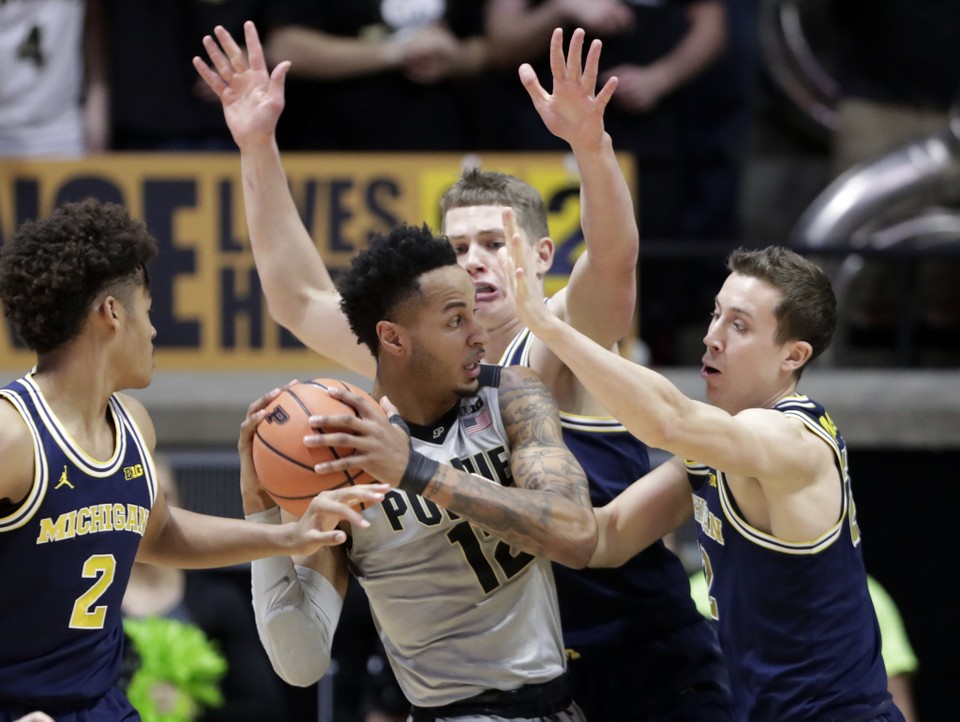 Michigan and Purdue are two teams that are completely ill-equipped to guard each other and that was never more clear than the first 10 minutes of the second half.

Michigan scored 32 points in its first 14 possessions after the break, that’s 2.28 points per possession, while Purdue scored 27.

That’s the sort of near perfect offense that would turn any average game into a rout, but instead the teams merely traded buckets and were tied at 68.

Michigan blinked first by turning the ball over on back-to-back trips and missing a pair of free throws as Purdue promptly opened up a six-point lead.. The Wolverines wouldn’t get back within a single possession until there were 31 seconds left.

The Wolverines eventually figured out a way to slow down Purdue, holding the Boilermakers scoreless for four consecutive possessions, but after cutting the deficit to just 4 points, Michigan turned the ball over on back-to-back trips once again and ended its comeback hopes. 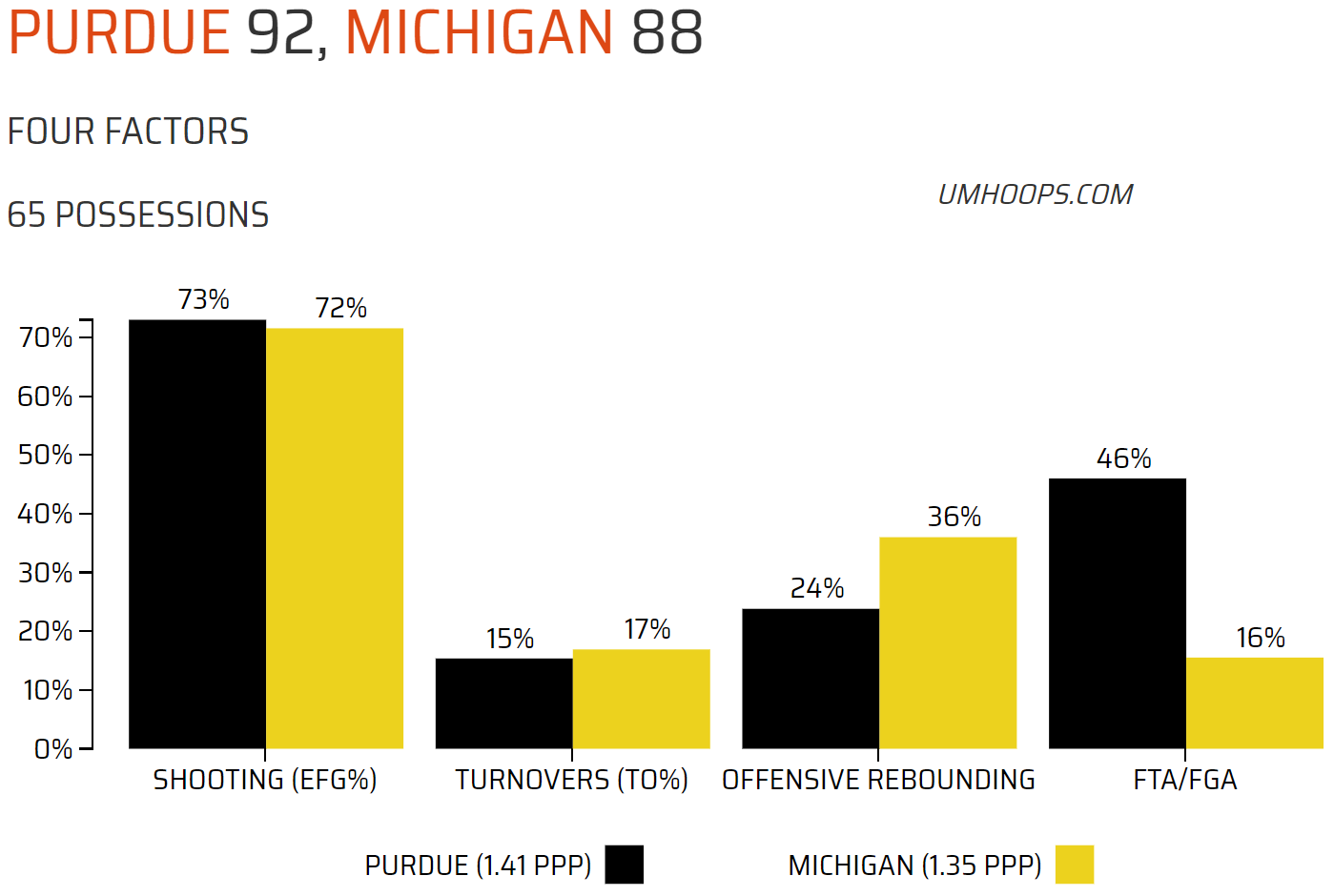 Michigan played its best offensive game of the season* on the road against the No. 3 ranked defense in the country. The Wolverines posted an impressive 72% effective field goal percentage, making 63% of their twos and 57% of their threes.

It’s hard to complain about turning the ball over on 17% of possessions, but Michigan’s giveaways seemed to come in the most critical spots. The Wolverines also rebounded 36% of their missed shots for 19 second chance points.

The offense might not have scored every possession down the stretch, but Michigan should beat any team in the country if it scores 1.35 points per possession. Prior to this game, the best offensive performance by a Big Ten team in a losing effort this year was Illinois scoring 1.17 points per possession against Iowa.

Which brings us back to the defense. Michigan allowed Purdue to score 1.41 points per possession, make 67% of its twos and 55% of its threes. Isaac Haas and Vince Edwards combined to score 54 points on 19-of-25 shooting from the field and 8 assists.

It felt like Michigan switched more screens off the ball in this game to deal with Purdue’s shooters getting open looks off the ball. The Boilermakers still hit 11 threes on 20 attempts (and three starters hit three triples), but Vincent Edwards got loose as a byproduct of all the switching. That communication off the ball led to him posting smaller guards or back-cutting mid-switch.

Michigan’s defense is improved this year, but forcing misses is still a challenge. The Wolverines couldn’t slow down Haas, but they are ranked just 11th in the Big Ten in effective field goal percentage defense this year. The improved defensive rebounding is great, but at some point the Wolverines need to force more misses.

It feels like an important weekend coming up for Michigan to regroup. This game was a reminder that some of those offensive flashes we saw earlier in the month might be real and that tired legs might have impacted U-M in recent dismal offensive showings. But this team is also just 6-4 in the league and needs to start racking up some victories and show some improvement on the defensive end of the floor. Ken Pomeroy lists Michigan as a favorite in its next seven games and now we’ll see how this team looks in games that it is supposed to win.

*Against a Division I opponent. 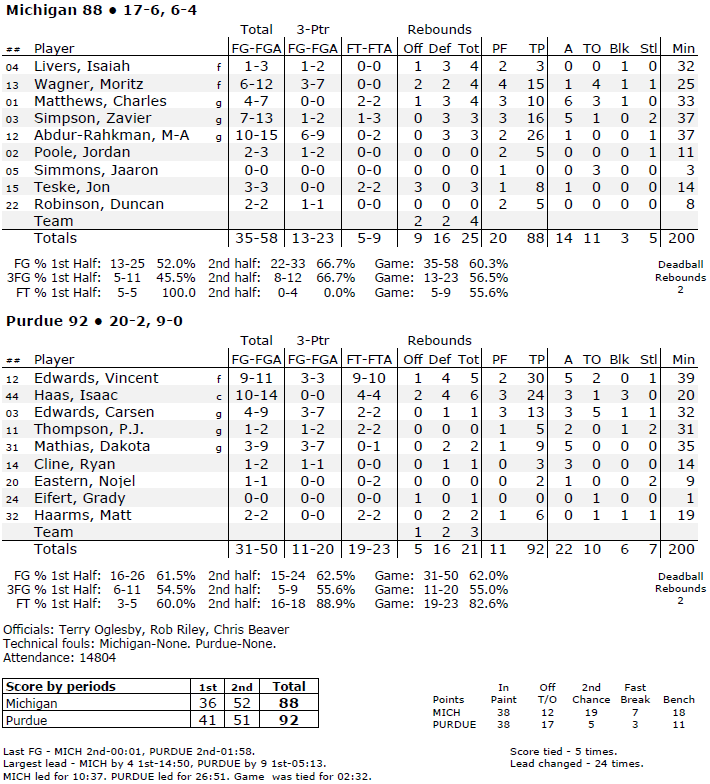