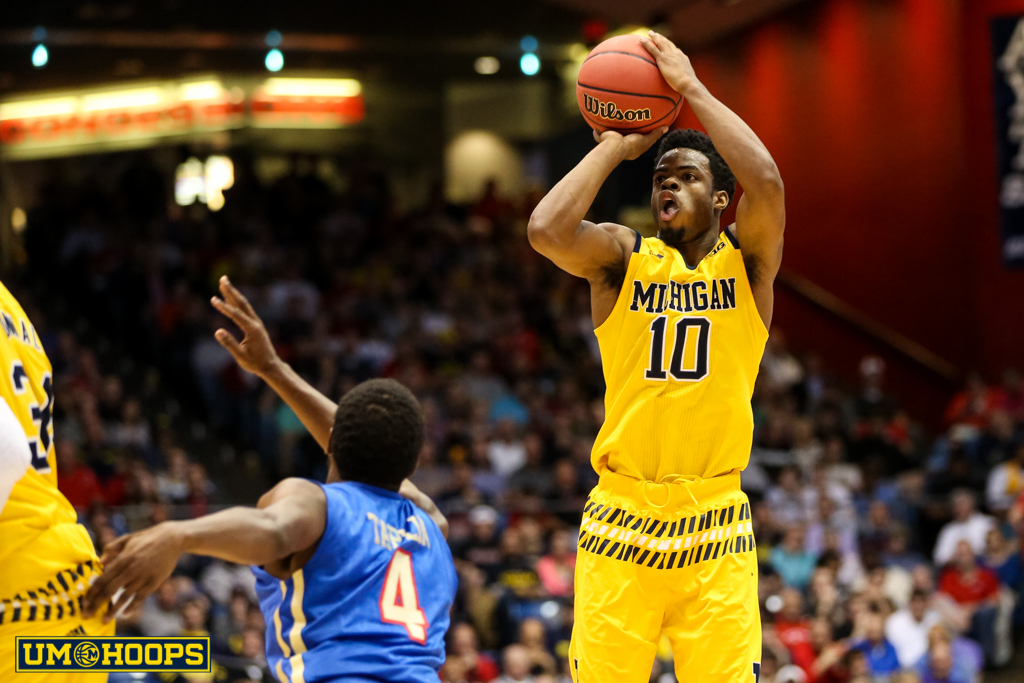 Our selection process involved much deliberation to arrive at a list we hope will provide plenty of reaction and debate. The series will be broken into five parts and our third installment of players 15-11 is available below: (Previously: 25-21, 20-16)

Quietly, McIntosh put together one of the better seasons for a Big Ten guard as a sophomore. He logged the third highest percentage of minutes played in the conference, was second in assist rate to Denzel Valentine and had an offensive rating of 110.1 for the season. He was also fourth in the conference in assist-to-turnover ratio.

His efficiency dipped quite a bit in league play (40.4 percent on 2s, 27.6 percent on 3s), but given the workload and responsibility he carried in the Wildcats offense, that wasn’t totally unexpected. With the graduation of Tre Demps and Alex Olah, all of the notable Bill Carmody holdovers have departed Evanston and Northwestern is officially McIntosh’s team to run.

As a junior, he has a chance to nab All-Big Ten honors if he can develop a more reliable jumpshot and lead the Wildcats, who still have never made the NCAA tournament, to a few more Big Ten wins.

Harris is Michigan State’s only returning starter from last year’s team. While he doesn’t have the hype of some of the Spartan freshman, he’s a natural fit to take on a much bigger role as a senior.

The West Virginia transfer has proven that he can put up big numbers (he averaged 17 points per game as a sophomore at West Virginia), but he’ll have to find more consistency as a senior. Michigan State hasn’t had a freshman lead the team in scoring since Shawn Respert in 1992, which means the smart money might be on Harris to lead the Spartans this season.

Harris has proven he can hit the three-point shot (44% last season, 41% career), but he’ll need to develop a more consistent game inside the arc (43%) and improve his assist (17.3 assist rate) to turnover (18.9% turnover rate) numbers to become a more complete player.

Walton enters his fourth year as Michigan’s starting point guard and he’s proven that he can be the steady-hand that leads a team, but he hasn’t put everything together to grow into a star.

Walton can hit open shots, he can distribute the ball and he’s a ridiculous rebounder for his size (he was a top-20 defensive rebounder in the conference despite standing just 6-foot-1). His only bugaboo has been his inability to finish inside the arc. Walton shot just 36% on 140 2-point attempts last season after making just 32% of his 2s as a sophomore. The sophomore struggles were chalked up to a turf-toe injury that eventually cost him his season, but the recurring problems last year pose a significant question moving forward.

Walton was Michigan’s “KenPom MVP” in six of Michigan’s Big Ten nine wins after Caris LeVert’s injury last season, so his importance to the Wolverines is clear. But he’ll need to take the next step to help Michigan contend.

Koenig has been a stalwart in the Wisconsin rotation for the past three seasons, two of which concluded with the Badgers in the Final Four. (And last season, this shot by Koenig sent the Badgers to the Sweet Sixteen.) His efficiency dipped a bit as a junior in a larger role, but he was still a productive player. Koenig ranked in the 96th percentile nationally as a spot-up shooter, according to Synergy Sports. In 109 spot-up possessions, he scored 138 points. He was also a very good 3-point shooter in Big Ten play at 42.3 percent, good for ninth in the conference.

Given that Wisconsin returns every notable contributor from a team expected to contend for the league crown, Koenig’s role isn’t expected to change much in his final season. His midrange game needs to improve – he shot just 35.3 percent on 2-point jump shots – but if Koenig can just split the difference between his efficiency numbers as a sophomore and a junior, he’ll easily be one of the Big Ten’s best guards.

He might not boast the same highlight reel caliber dunks as fellow freshman Miles Bridges, but Langford might be even more equipped to make an immediate impact in East Lansing.

Langford averaged 21 points, seven rebounds and three assists per game last year at Madison Academy and he seems likely to slot into the starting lineup for Tom Izzo. What do you want from an instant impact freshman? How about a complete player.

“He handles the ball like a point guard, shoots like a shooting guard and attacks like an athletic wing,” wrote MLive’s Brendan Quinn after watching Langford this summer. “The fundamentals are sound and the IQ is high.”